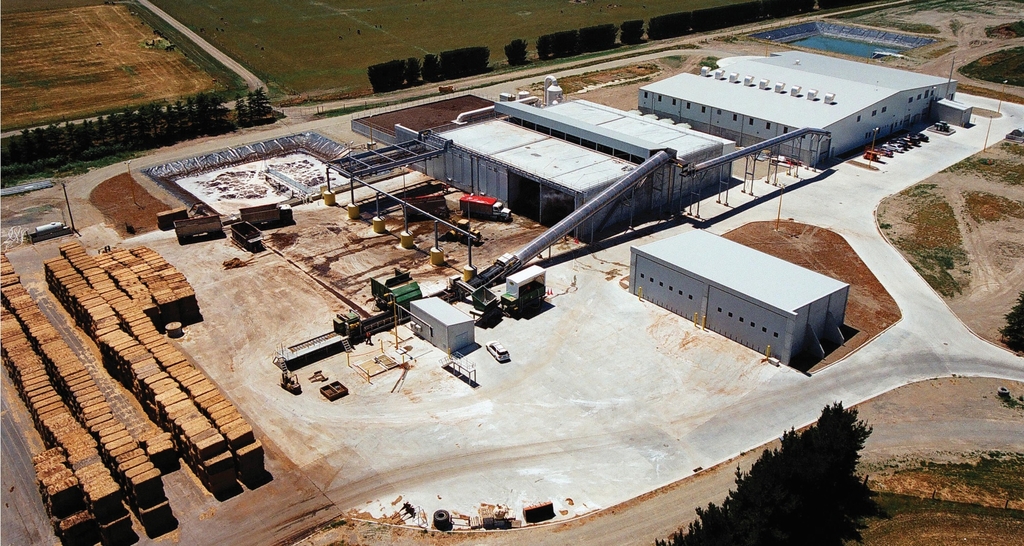 Formed in 1970 by Philip Burdon and Roger Giles as a private company,
Meadow Mushrooms Ltd is today the largest producer of mushrooms in NZ
and one of the top two in Australasia. The head office is based at its original
site in Prebbleton, 20 minutes south of Christchurch New Zealand.
Meadow Mushrooms Ltd. employs approx. 500 people nationwide, with
more developments in the pipeline.
It is the only grower in New Zealand with full vertical integration from the
production of spawn through to the dispatch to market and has a diverse
range of products all with the common theme of a mushroom base.
Meadow Mushrooms Ltd today consists of Meadow Mushrooms in Prebbleton
(two sites), Miranda Laboratories where spawn is produced and Emma
Foods where mushrooms are processed for canning and dehydration.
Giggs Farm is another location of Meadow Mushrooms, where the essential
compost is produced. This is situated just south of Christchurch at Dunsandel.
Substantial investments have been made in the upgrading and expansion of
facilities across Meadow Mushrooms Ltd. This has involved the introduction
of the latest technology and computerised growing systems to both farms,
and the building and utilisation of new state of the art aerated compost yards
for the provision of compost to the two farms (most recently in Christchurch
with a $45 million dollar expansion). Further innovations continue to ensure
that Meadow Mushrooms Ltd continues to offer the best possible product to
consumers.
In addition to these facility changes, there have been significant expansions
of the product range offered and many developments in packaging.
The growing rooms now produce on average 147 tonne a week. The product
mix is dominated by the market favourite, the White Button mushroom.
In addition to this are the increasingly more popular varieties - Portabellos
(large open brown mushrooms) and Swiss Browns (brown buttons).
The full range of fresh products are sold domestically with a small portion
being exported. They are dispatched pre-packaged for convenience, as well as
in bulk loose trays containing three or four kilo’s dependent on the product.
Over the years Meadow Mushrooms Ltd has become a well-known brand nationally.
Heavy branded promotions began in 1997 as a means to drive growth in the
market. The product range under this ‘Meadows’ brand extends beyond the fresh
category into canned mushrooms under the ‘Emma’ brand and prepared frozen
foods such as golden and garlic crumbed mushrooms.
Meadow Mushrooms Ltd has invested significantly in its development particularly
in recent years, and is continuing to do so. Keep an eye on the website for
further developments and updates!
Reference:
“Christiaens supplied us with 5 phase-1 bunkers, 9 phase-2/3 tunnels and 24
growing rooms and all of the controls and machinery to go with it, and managed
to do it on time, and on budget. Construction of the compost yard started in
January 2010 and was completed in early November. Growing rooms were started
about 2 months later and were completed in January 2011, and we were very
pleased to be able to produce the first mushrooms a few weeks later in February
that year. Christiaens supervisors were excellent throughout the project, and were
a key part of achieving completion in the required timeframe. We are very happy
with both facilities and they’re working well.”
This project was engineered to be earthquake resistant. Recently these buildings
were heavily tested by several major earthquakes. At one of these earthquakes
the epic centre was only a mile away from the plant. There was no damage at all.
www.meadowmushrooms.co.nz
Project overview

Your web browser is outdated.

For correct viewing of this website is a recent version of your browser required. You can update your browser by downloading the latest version.